Sightseeing cruises can also be arranged to the many historic sights in Sligo Bay including the Metal Man, Oyster and Blackrock lighthouse, the 17th Century Beach Bar and the 6th century monastic settlement on Inishmurray Island. There is also abundant wildlife to spot during the excursions.

A popular option with Sligo Boat Charters is the short 2 hour sightseeing and eco tourism tour departing from Rosses Point Pontoon by appointment. Guests can bask in the beauty of Rosses Point (and enjoy the beach and some nice cafes, bars and restaurants afterwards) from the sea where you will hear a little on the real Yeats connection to Rosses Point and the “Yeats County”, see the 18th century lighthouses, Oyster and Coney Island, Sligo Port and Shipping Channels, the old Coast Guard Stations and even hear a little bit about the old pirates and sailors who frequented the area before finishing up with a visit to the local seal colony! Guests will get a chance to relax and take in the fresh salty air, relax and hear the cry of the seagulls on the way back in. Highly recommended!

The sightseeing cruise with new audio guide departs Rosses Point or Sligo city pontoon by appointment and you go past and hear about many local features such as the Old Sligo City Port, Sligo Harbour Shipping Channel, The Donegal Wreck, Rosses Point, Oyster and Coney Island, the Old Pilot House, Sligo Yacht Club, the Metal Man and Blackrock and Oyster Island, Lower Rosses lighthouses. You will even hear about the close Yeats connections with Rosses Point.

Take one of our on board guides or just listen to our new improved audio guide for more detailed information on each!

The famous Metal Man, designed by Thomas Kirk, the designer of the GPO statues in Dublin, is a solid cast iron, 14 foot tall statue of a man with his arm outstretched which was erected in 1821. The side his arm points to signals the safe side of navigation, and when his light is lined up with the light on Oyster Island lighthouse this is called the leading lights or safe deep-water channel leading into Sligo Harbour from Sligo Bay for shipping.

Blackrock beacon was converted to a lighthouse in the early 1800s, as many attempts at placing a beacon here were simply washed away. The tower has been added to and improved by Irish lights since, and now stands at 25 metres high. It is the only one in Ireland with the steps on the outside due to it’s solid core.

The skipper is the head local Irish Lights Contractor for Sligo Bay will be happy to answer any questions people may have about the many unique local lighthouses or sights visible during the cruise. 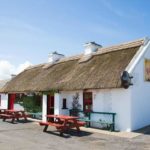 We can also arrange charters to view the 17th century bar, The Beach Bar which is situated by the Aughris Head cliff top walk, and the local beach of Dunmorran. Built over 300 years ago, the Beach Bar is one of Sligo’s most characteristic thatched pubs.

There are local facilities for swimmers and surfers, and many people love to bring a barbeque to light in the scenic surroundings whilst enjoying a drink from the pub. The Beach bar also serves food all day from 1pm to 8pm, and a menu is available on board the M.V. Sarah Marie, so clients can order their meal on board and have it waiting for them on arrival to Aughris Head.